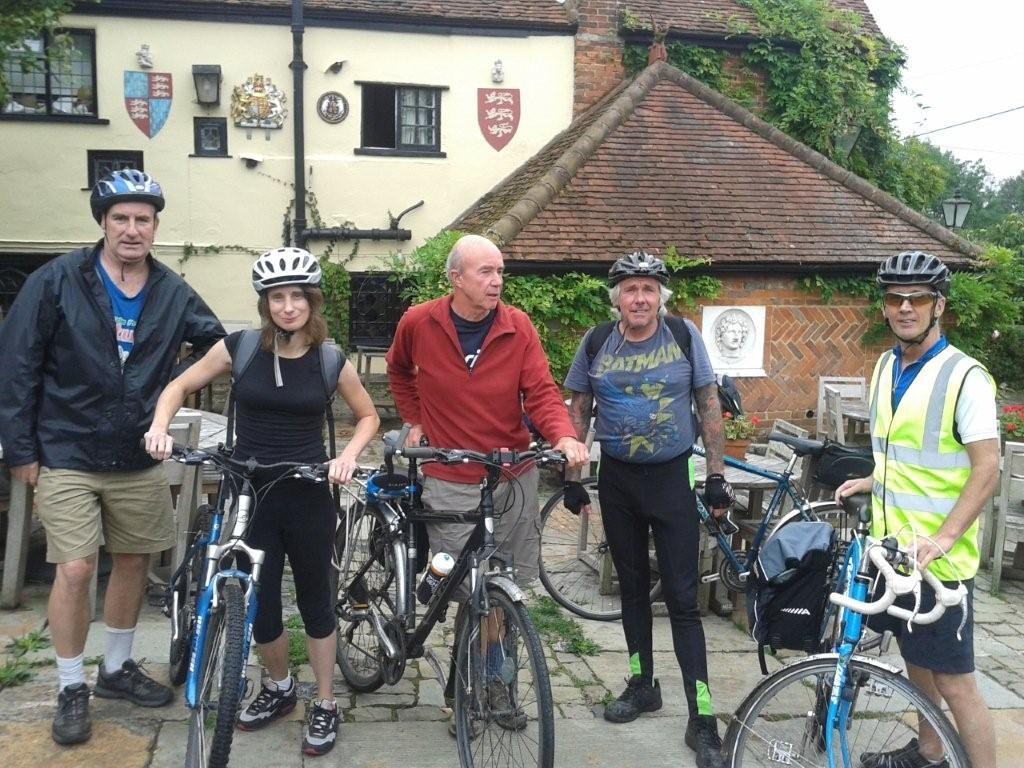 Steve`s Ride to The Royal Standard at Marlow – Was this a before or after picture?
They are all standing must have been before.

After approximately 3 months of sitting on bum twiddling thumbs I had recovered from my accident sufficiently to start riding again. Neck is still restricted in movement but not enough to deter me from cycling. Been on half a dozen rides to date and gradually my legs are beginning to almost like hills. The good thing that has come out of this is that Herts CC has now made the road deformation in Rousebarn Lane, which caused my accident, safe(r) by making a substantial ramp over the obstruction.

You may be asking why there are not so many coloured pictures and text in this issue. The reason is purely economic, colour costs more, a lot more and we are trying to ensure that expenditure at least equals income.

I won`t be around for the Christmas period so I`ll take this opportunity to wish you all a safe and happy Christmas and new year. Look forward to an accident free (hopefully) 2015 and some good rides. 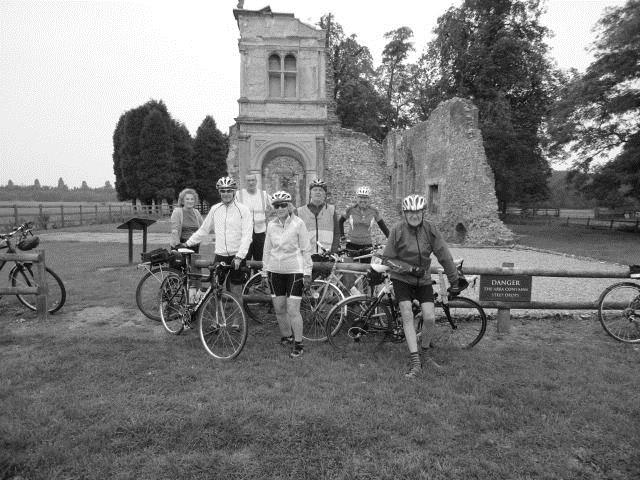 The Ruins at Gorehambury – I`ll say no more

What is Spokes about? Are we struggling?

The number of people cycling is growing. SPOKES continues to get new members but do those members want to join or lead rides?

There are many reasons why people join, rides have to be convenient & enjoyable, but people also want better & safer cycling routes for which we campaign.

To be a successful cycle club we also need to have a united social bond.

So what do you want from SPOKES – Please let us know.

We are now into the Winter season, but there will still be organised rides & other activities. We hope to have spontaneous rides in the future (organised at short notice) but are still working on an effective ay to deliver this.

What is happening on the Cycling Scene

If you look at the London Cycling Campaigns web-site you will see plans for several really good improvements by giving more space for cycling, but also improving the environment for all.

The latest national campaigning initiatives are about giving cyclists more space. When Highways Engineers are designing road improvements they need to allow more space for cycling, which occasionally may mean less space for motorist.

The government is consulting on its “Ten Year Cycling Delivery Plan” the intension being to double the amount of cycling by 2025. Our local authorities should be considering how to achieve this.

Watford High St – The Parade end of the High St seems to have settled down, as you can now cycle anywhere around the pedestrians, although it may be helpful if a couple more Shared Use signs were visible.

Health Campus – Final details are not yet available, but there should be a shared use path alongside the new road.  Safe wide paths need to be provided suitable for pedestrians, disabled people & cyclist.  It is important integrated routes completing a safe network.

Cassiobury Park –  Lottery funding has been agreed.  We need to see a cycle route linking the existing cycle paths to the canal path allowing access to all & encouraging cycling to the park.

A short term solution to the many issues here has still to be found.

Other local developments include new schools should have easy safe cycle access linked to the existing cycle routes.

What does SPOKES need

Space for Cycling Meeting in Rickmansworth

If you want to improve cycling facilities in Watford, Three Rivers, or (especially) in Hertsmere please come to the next SW Herts campaigning meeting. This will be at Roger’s home on Monday 12th January 2015 at 19:30. If you have not yet let Roger know that you are coming, please ring him on 01923 720 143 (before 22:00) and you will also find out where the meeting is. I will be sending out an agenda before the meeting.

The Government will announce final details of how local authorities can compete for future cycling money on November 27th, shortly before Chancellor George Osborne makes the last Autumn Statement of the

Current Parliament. The draft version of its Cycling Delivery Plan includes an ambition to double cycling levels by 2025 and increase the percentage of school children aged 5 to 10 years walking to school to 55% by 2025. Local Authorities must create local walking and cycling delivery plans in order to gain “priority access to new funding streams”.

From April 2015, Three Rivers District Council are planning to replace the S106 Sustainable Transport money from developers (which is earmarked for cycling and walking) with part of the Community Infrastructure Levy (CIL) and also change which Local Authorities are responsible for allocating the money to projects ¯ the part of the CIL money for cycling and walking will be split between the District Council and Parish Councils for allocation. (The remaining CIL money for Highways will continue to be allocated to projects by Hertfordshire County Council).

The District Council has replied to the joint Spokes/CTC petition for a programme of safe cycle routes to our schools (funded by a substantial increase in the CIL money for cycling). In the reply, the Lead Member for Economic Development, Sustainability and Transport described himself and the council as “born again cyclists”. Meanwhile, we have objected to current plans for allocating the CIL money because they do not involve spending anything on cycling or walking.

Spokes and the CTC have agreed to let me take over as the Watford area campaigner, but I shall be getting guidance from Roger and Peter as I haven’t done any rights work for a very long time. Indeed, I am eager to receive advice from anyone and everyone regarding what we could do to improve Watford as a cycling town. Whereas the Cycle Hub is leading what I would call ‘in the community’ initiatives to get people on their bikes, (eg bikeability, Skyride,) I will concentrate on the ‘built environment’ which can be roughly summed up as road design, including cycle lanes and bike parking.

Well, I think it can be fairly said that Watford has a lot for the campaigner to get their teeth into! Nevertheless, there are some signs that in Watford cyclists’ are being provided for where this as not always been the case in the past. A senior engineer in Herts CC advises me that in January 2015 works are expected to begin to make Market Street two-way for cyclists. This will provide a valuable link between W. Watford and the town centre. Another new project, due to start about now and finish early in 2015 is to make the area around Central Pools and the Hempstead Road, where it joins the Parade, more cycle-friendly by putting in a shared-use footway and, I believe, a Toucan crossing. In view of the traffic congestion in this area, and the big roundabout that the scheme helps eastbound cyclists on Hempstead Road to avoid, these works are much-needed. Another safety scheme has been planned for Clarendon Road but I do not have the details as I write this (apologies). Finally, there was a public meeting at the Cycle Hub in early September about a proposed one-way restriction for Vicarage Road in connection with the new West Watford Station of the Croxley Rail Link. It was confirmed by Herts engineers at the meeting that the over 1 mile detour caused by the plans would not apply to cyclists as a shared-use footway of a couple of hundred yards is to be put in.

As for the political context, Spokes is apolitical but it seems that government now officially states that getting more people is a “Good Thing”. Locally, it is the “Hertfordshire Year of Cycling” which runs until June 2015 (see www.hertsdirect.org ) and which must, at the least, signal a  more sympathetic approach on the part of local politicians to cycling so can we hope that the County starts to ‘put its money where its mouth is’? 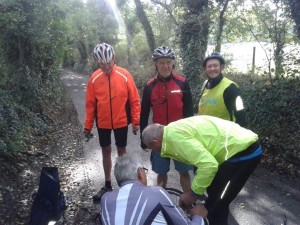 Denis`s ride on 9th October started well with a puncture in the  first mile.
Nice to see that the true British working system is alive and well in Rousebarn Lane.
Three consultants, one supervisor and one  worker. 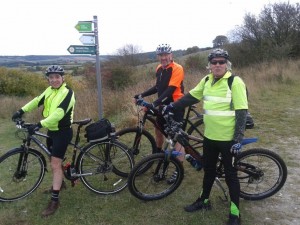 Brian`s ride to Ivinghoe and Aldbury on the 12th October. A good 35 miler 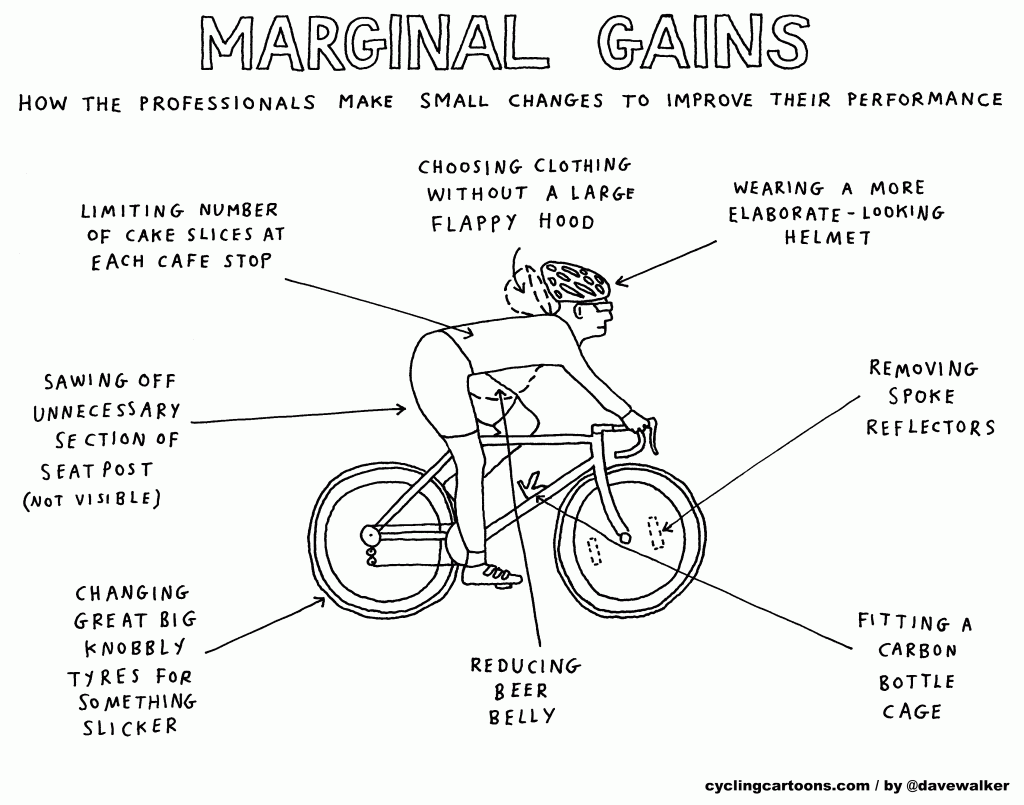 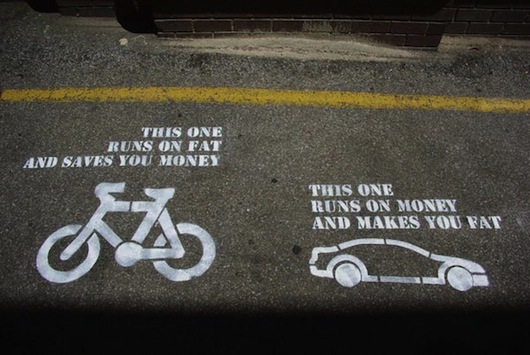